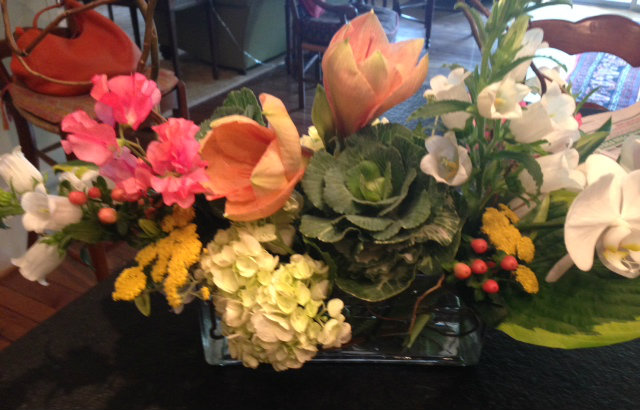 Hug with Both Arms

For Mother’s Day I received the most beautiful bouquet of flowers from my daughter, Libby, who lives in DC. Attached was a card that read, “I’m sending you a hug with both arms!” I wasn’t sure what that meant but I knew that I liked it.

We all know what weak hugs and weak handshakes feel like. Insincere. Half-baked. Thoughtless. Later in the day I sent her a photo of the flowers to thank her. She called, and I asked her about the comment on the notecard. She proceeded to tell me about Sandra Bullock’s comments at a graduation ceremony.

Sandra has been active in the New Orleans area since Hurricane Katrina, supporting a charter school and funding a health clinic. Asked to give the commencement address for the Warren Easton Charter High School, her comments were short and sweet. But, as Libby heard them and later I read them, they were profound in their simplicity.

Hug like you mean it. When someone who cares about you hugs you. Hug them back with two arms. Don’t do the one-armed hug, because when you hug with two arms, it allows you to lean on somebody, and we always need somebody to lean on.

The concept of leaning on someone is a bit challenging these days. Men rarely feel comfortable doing that. I, like many mothers taught my daughters to be strong, independent, and to view themselves as equals in a world of challenges. Women have even gone so far as to advise others to “lean in,” per Sheryl Sandburg’s recent book that addresses modern thinking and actions of women as they assert themselves in the workplace.  That topic could be a blog or dissertation, in and of itself! 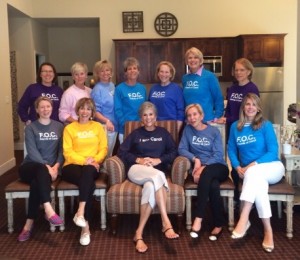 Last weekend I joined friends, family, and colleagues of my sister-in-law, Carol Emmott, at a beautiful place in Half Moon Bay, California. We were celebrating Carol’s life as she faces a diagnosis of recurrent uterine cancer.

During the weekend, Carol updated the dozen or more of us with her current health status as well as her thoughts about her future. She was very straightforward and even shared how according to her surgeon’s initial take on her recurrence last fall, she should be dead in two weeks. His recent revision, however, predicts six months to two years. But, in Carol’s dignified and articulate manner, she shared that she had withstood another horrendous chemotherapy regime and currently looked forward to participating in a clinical trial at University of California San Francisco. She is hopeful but realistic. Her strength and honesty was so dominant that she inspired many of us to raise our glasses in her honor and share stories of love and respect for her.

Carol, by the way, is one of my mentors. She’s more than a mere sister-in-law. She received her doctorate in the early 1970’s without leaning on very many people. Her career in healthcare for over forty years includes executive positions for the Public Health Department of San Francisco and the state of California, serving as a political appointee for the department of Health and Human Services, and most recently being a partner in a search firm specializing in healthcare leadership. She also helped form the Women’s Healthcare Alliance more than twenty-five years ago. The members of the Alliance are women who have been “movers” and “shakers” in health systems for decades and will be for years to come. Women in that very group organized the gathering in Half Moon Bay.

Off and on, over the weekend, many of us made toasts to Carol. We looked her in the eyes and said what we felt she needed to hear. What she had done for us. What she means to us. My comments to her were that we are the epitome of the modern-day acronym “BFF” (best friends forever). Although we have never lived less than a thousand miles apart, maybe being married to brothers (both urologists), having the same in-law’s, raising children simultaneously, growing up in Oklahoma, having careers in health, to name only a few commonalities, have led us to have a tender, yet strong relationship for four decades!

A recurrent comment from Carol over the weekend was how she has never liked to be in the spotlight. She further shared that having an illness, that will probably be life limiting in some way, has allowed her to share herself with others in personal and intimate ways that were very new to her. She has had time for lunch with friends, to expand her rose garden, for walks with her son, and to reflect on her life with her husband of forty-five years. Carol commented that she has had so many amazing experiences with loved ones, talking and sharing, that she feels like she is living through her own Wake.

Carol Emmott’s reflections and Sandra Bullock’s comments about hugging another person are each pieces of a complex and mysterious puzzle…the puzzle of a life. Carol’s dignity teaches us to live a virtuous life…one that we can be proud of, one where we have no regrets. Sandra’s advice about hugging says that while we are living a virtuous life that we should live with sincerity, hugging others with reciprocity, like the person needs you as much as you need them.

I am fortunate that I have Carol in my life. That she was a role model for me as I chose my career many years ago and as my daughters choose theirs now. I am lucky that she has always hugged me with two arms.