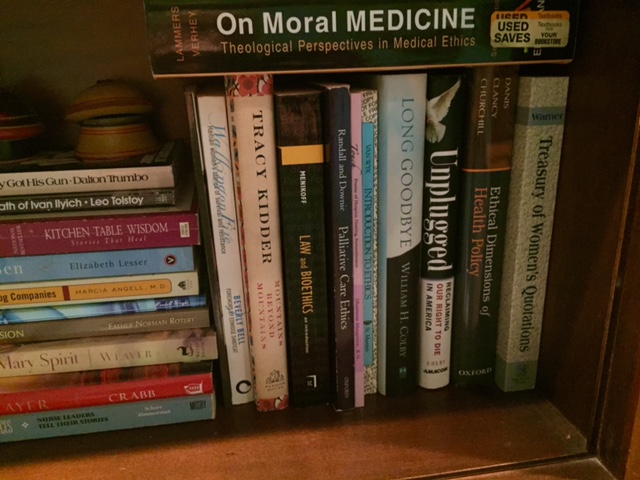 Over ten years ago, I made a new and great friend, Amy.

While playing in an interclub golf event, she asked me at the end of our round if I was related to Dr. Emmott. I told her that he was my husband. She explained how he had helped with the fertility issues around the pregnancy of her one and only little man, Macauley. Her husband was older and had grown children and there had been challenges with her becoming pregnant. She laughed and said they had even thought about naming Mac, David, my husband’s first name. We became fast friends, as did our husbands.

I have not only watched her son grow into a young man, I have watched Amy grow into a successful realtor and wise woman. I recall watching her care for her mother and how gracefully she cared for Barbara AKA “Bobby” as she aged and succumbed to cancer. Amy and her mother were the best of friends. I would forget that Bobby was in her 80’s as Amy talked with her many times when we were together. They were the epitome of BFF’s.

Amy’s phone is always on and buzzing. Real estate calls and calls from her brothers. And, “yes,” she talks to her three, older brothers, especially her oldest brother, Pete, everyday. About golf, about family matters, and about nothing. They crack me up!

Pete had a massive coronary two days ago. Amy’s text to me yesterday says her heart is breaking. I cried when I read it. She loves this man. I hurt for her. I recall similar tears when at her mother’s funeral. I cried so much just watching Amy’s strength and, yet, her grief, that I didn’t attend the reception after because my face was so red and swollen.

This morning as Amy was driving to the hospital and the ICU, where she knows, Pete will not recover, she called me. After talking about his prognosis, she asked me what my opinion was about when a person’s soul leaves their body. Not typical conversation of most friends, but she knows this is my area of research and writing.

I responded in an academic way by referring to Dr. Sherwin Nuland’s book, How We Die. I read his writings and heard him talk several times before his own death a few years ago.

Dr. Nuland shared many patient stories that reassure professionals and families that “everyone becomes littler with death—when the human spirit departs, it takes with it the vital stuffing of life.” I always interpreted this, probably for my own psychological comfort, to mean, also, the suffering of life.

Amy and I talked about how Pete won a golf match on Monday, a personal match he sets up annually between friends. He reported to her how far his friend’s son had hit the “f” ing ball. He went to sleep that night and has not really been alert since his heart attack in the early hours the next morning. His beautiful wife performed CPR on him while the medics arrived.

Amy, also, shared how Pete, over the years, informed many of his friends, and he has a lot of friends, that if he ever was brain dead to wheel him into a field and shoot him. He even had a blood pact with one of his old buddies. She said Pete would be really angry, now, as he lays hooked up to a ventilator and on many medicines to keep his blood pressure at the level of life.  I told her that his long-standing request is one that is not honored in our civil and technological world, but that humane decisions can be made that show the essence of his wishes are understood.

“He’s not mad yet, Amy,” I said. But today, his wife, Pam, and you and your family will be facing decisions about his life and as, Derek Humphry’s controversial book title in 1991 called death, his Final Exit.

I pulled my dust-covered copy of How We Die off the shelf after I hung up the phone with Amy. There was a page turned down where Dr. Nuland quoted the poet, Rilke:

Oh Lord, give each of us his own death,
The Dying, that issues forth out of the life
In which he had love, meaning and despair.

I think this was a prayer. I offer it to the heavens for Pete as he transitions from this life in ways that no one really understands.