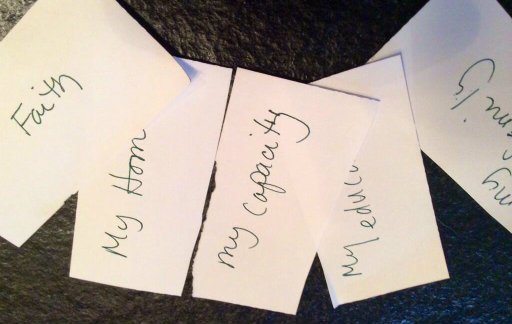 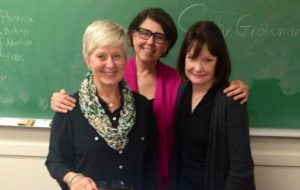 As a nurse and ethicist, I teach a religion and ethics course for nursing seniors. In this class, the students and I explore religions and their impact on contemporary health issues.

This past week my class and I hosted two guest speakers: Sandy Silva, an attorney, savvy in elder law and Harvard theories of mediation; and Cathy Grossman, a lifelong daily newspaper/online journalist specializing in religion, ethics and spirituality.

Sandy began the evening with an exercise called “5 Most.”

She gave each student five small pieces of paper and instructed them to write one or two words on each one that would name something they value more than anything else in their lives. Students named such values as family, education, running marathons, travel, health, and faith. I did the exercise as well.

Next Sandy asked the students to hold the pieces of paper like a hand of cards with the writing toward them. Then she, Cathy and I walked about the room, taking one cherished choice from each of them. Students cried out, “Oh, no!” “Not that one!” “You’re so mean.” I had a student choose from my hand, and she took away the piece of paper on which I had scribbled “my education.” I felt very compromised but still had my family, my home, my health, and my capacity.

Sandy reminded us that the feelings we were having about losing something of great value were very similar to how the patients of these future nurses will feel when they are diagnosed with serious illness, admitted to a hospital, or need to undergo life-saving treatments. “Your patients will lose their ability to provide for family, walk independently, or do many of the things that give them a secure identity,” she said.

With much moaning and groaning, the students agreed to choose a second loss. I picked up notes that robbed students of their fiancée, pet dogs, jobs, and scholarships. Again, Sandy pointed out that many diagnoses, ill health, and invasive treatments take away one’s health, role in life, and financial security.

In the third and final round, Sandy asked the students to choose their own final losses or if they couldn’t to ask us to make the choice for them. After the losses were collected and after a moment of stunned silence, Sandy spoke.

“Many times patients feel so beaten down by the process of illness and treatments that they let others take over, making difficult decisions for them. Their lives have become too hard.” They fall back on the choices of others.

Although most of the students picked their own final losses, they all experienced how awful it feels to let go of one’s most cherished values – homes, parents, scholarships, independence. I went home certain that the class had been a valuable learning experience – not only for the students, but for me as well. I also had a feeling that I still had something else to learn.

That night I had an interesting dream. My husband of thirty-six years, David, is a physician, so our phone has rung in the night for years. In my dream, David is on the phone, a normal life event, but he has the Bible out and is searching for a particular scripture, an unlikely event! I ask, “Who is it?” He shushes me, which in real life, I would hate. Then he reads a verse from the Bible to the person on the other end of the line, and I hear him say, “Well, Cam (our oldest child and only son), maybe your mom can answer that question.” David puts his hand over the phone and says, “It’s Cam. He’s confused about what he believes. He wants to know if there really is a God.”

So back to my waking life . . . my dad was a Baptist minister. I know a bit about theology, especially about the basic precepts of Christian religions. David and I raised our children in the Episcopal Church, but a few years ago, I became uninterested (for a lack of a better word) in the church we attended. We changed memberships. I felt the same about the new church – disappointed, uninspired, quite frankly, bored.

After talking to David, he and I began walking to a new age church, a few blocks from our home. We liked the music. We eventually joined there. But, really, I know that I don’t anchor my faith to the theology of our new church. I had eliminated a connection to a higher being from my daily life. That’s the truth. I have for several years taken every thing in my life to be mine and mine alone. I don’t pray often. I have become a skeptic, at best.

So what was I to say to Cam in my dream? I held the phone and said to our son,

“Cam, what you are asking about is a proof that no one can give to you. You and you alone have to develop a faith in something you cannot see, feel, or touch.”

I recall teaching my only son, in a dream, what I, myself had forgotten.

I teach at a Jesuit university. I am not a professor of theology. I am a nurse ethicist who teaches students about respecting the values and beliefs of their patients and families. To accept differences. To understand that one can do that with out agreeing with the many beliefs humans hold on to.

Somewhere along the way, I have become beige, neutral, passive in what I believe. I thought it would be easier not to think about it. I can think about more important things now – like my golf index, my next trip, my new chairs and ottoman. In fact, I knowingly gave up one of my 5 Most.

It has been ten days since the class Sandy, Cathy, and I presented to my students. Ten days since I dreamed that I told Cam that he must live a life of faith, even if only a tiny bit at a time, and through that faith, in whatever he chooses to believe, his life will become fuller and richer. He will not be afraid of things he cannot control. He will feel peace and contentment.

The struggle is not Cam’s. It’s mine. Sandy will probably come back and facilitate this exercise next semester. I wonder what I will write then on my five tiny pieces of paper.